Google Analytics is a fine tool for tracking your traffic. That said, it’s kind of clunky, even in its 4th version. It also gets blocked by all ad blockers, which is a deal breaker for most of us.

But that’s not it: the biggest issue for many businesses is its total lack of GDPR compliance.

First, here’s my listing of the best alternative tools, and then I’ll explain why you should care about GDPR compliance.

Simple Analytics is like its name says: simple. It works, has everything a GDPR-compliant analytics tool needs and is cheaper than Fathom.

This article uses affiliate links, which can compensate me at no cost to you if you decide to pursue a deal. I only promote products I've personally used and stand behind. 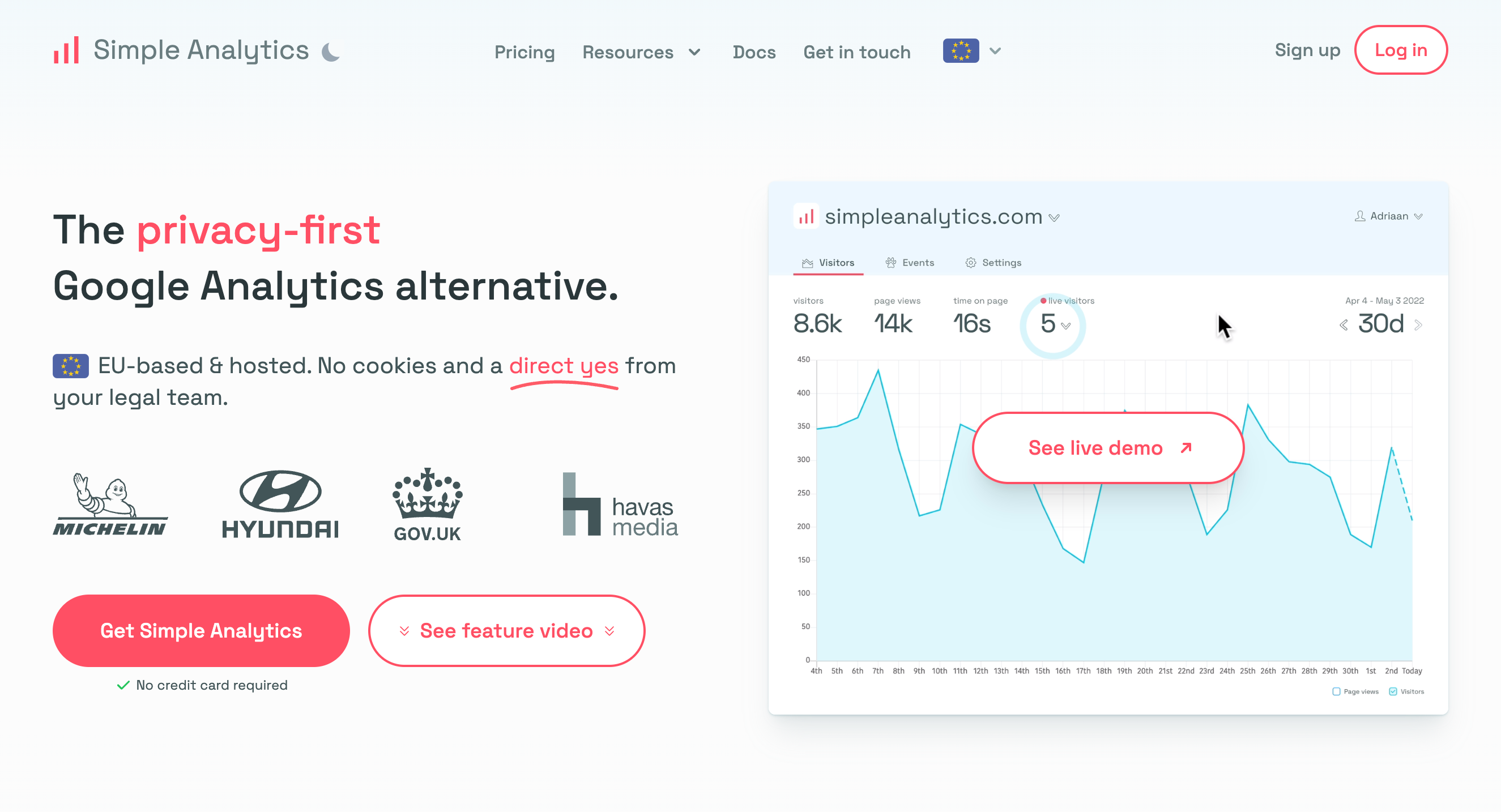 Simple Analytics is a simple but powerful GDPR-compliant analytics tool that allows you to track your visitors without compromizing their privacy.

Just like Fathom, it’s way easier to use than Google Analytics. It has a pretty interface and everything you expect from such a tool.

Fathom Analytics is a privacy-first analytics tool that doesn’t track your users. It’s a dead simple, lightweight, and fast alternative to Google Analytics. Of course, it’s also GDPR compliant and doesn’t use cookies, which could make you avoid a huge government fine.

What I love about Fathom compared to Google Analytics is that it’s easy to get the information you need. For instance, you may want to see how much visitors you acquired from Google in the past month. With Google Analytics, you have to go through a lot of steps to get that information. With Fathom, it’s on the dashboard and two clicks away.

Fathom is what this website uses to track its visitors. I can’t recommend this service enough!

GDPR stands for General Data Protection Regulation. It’s a European Union regulation that came into effect in 2018. It’s designed to protect the privacy of EU citizens and give them more control over their data.

Here’s why you should be concerned about GDPR

Government fines for non-compliance can be up to €10 million, or 2% of your previous annual revenue. That’s potentially a lot of money that goes to waste.

I'm a full-stack web developer and entrepreneur passionate about the TALL stack.
I help teams leverage the power of Laravel and its ecosystem.

Other posts to read

Knowing which Laravel version you are running is important before you start writing code on a new project. There are multiple ways to do so.

Laravel interview questions: what to expect in 2023

Job interviews are not as tough as they seem. I will give you guidance through my past experiences and a list of easy questions that will make you stand out.

Whether PHP is dead or not is a matter of numbers, not opinions. I will provide you with essential statistics that will lead you to make better decisions.

Are you looking for the best web hosting for Laravel projects and all budgets? I've got you covered. Here are the best I found.

Here's a case study for my blog in the programming niche, where I share everything I did to increase clicks by a huge amount since the beginning.

Is an array empty in PHP? A few ways to make sure of it.

There are multiple ways to check if an array is empty. Let me tell you about each of them and why and when you should use them.

PHP try & catch: what are exceptions and how to handle them?

Take your code to the next level, thanks to exceptions. Handle errors in a more graceful way within try and catch blocks.

Learn why and how to fix "Methods with the same name as their class will not be constructors in a future version of PHP" warnings.

Redirects in PHP are simple. I will guide you step by step and show you how to dodge some traps. Finally, we'll learn the nuance between 301 and 302 redirects.

Migrations are essential in any Laravel app using a database. I will tell you what they are, why you should use them and how you can generate them.